For the past year the Oxford vaccine has been making headlines as one of our most important tools in the fight against COVID-19. This has been especially true in the last few months, over which the vaccine has been authorised for clinical use in the UK, India, and recently the EU.

Here we talk to Dr Sean Elias, a post-doctoral immunologist and public engagement leader. He works at the Jenner Institute, an Oxford-based institution founded in 2005, which has been at the heart of vaccine development.

SARS-CoV-2 vaccines can be broadly categorised into viral vector, nucleic acid (DNA or RNA), whole virus, and protein-based vaccines. The Oxford-AstraZeneca vaccine is an example of a viral vector vaccine.

Most SARS-CoV-2 vaccines target the viral spike protein antigen on the surface of the virus and induce both T cells and antibodies to form part of a protective immune response. 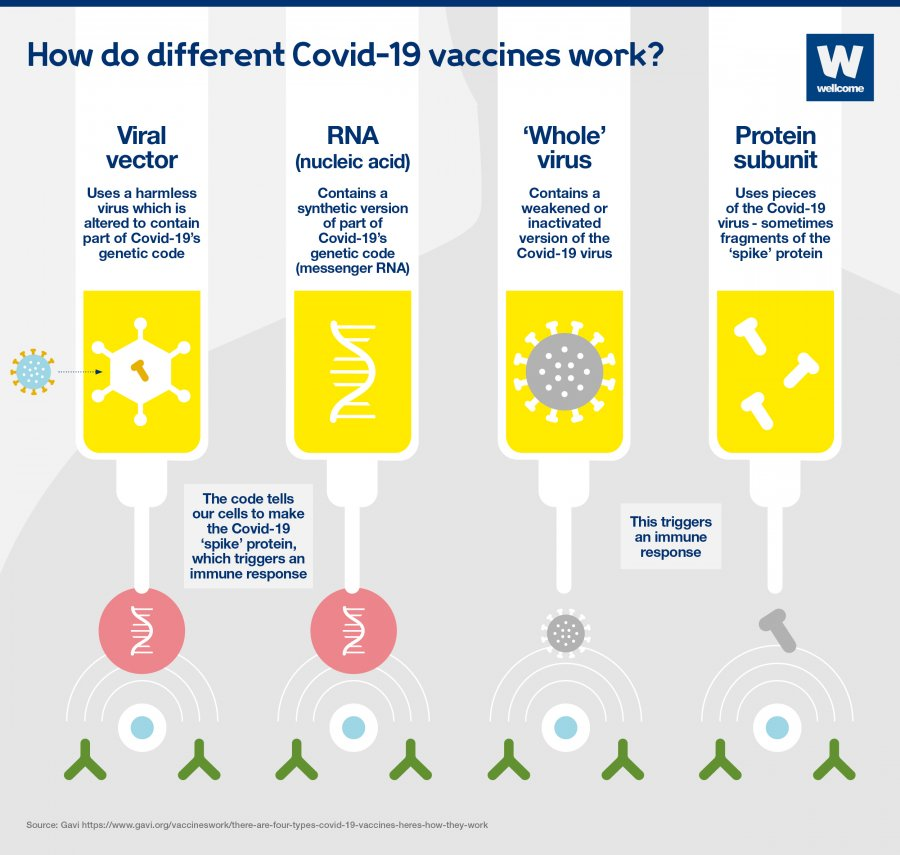 The Oxford Scientist: Can you briefly describe how the Oxford SARS-CoV-2 vaccine works?

Dr Sean Elias: The Oxford vaccine utilises a genetically modified virus called ChAdOx1, containing the genetic information for the spike protein of the SARS-CoV-2. This virus, which normally causes a common cold in chimpanzees, can freely enter human cells but has been modified so that the virus itself cannot replicate within them. Once inside a cell, the virus delivers the viral DNA to the nucleus, where the gene for the spike protein is translated to mRNA by host cell RNA polymerase. Spike protein mRNA is translated to spike protein in the cell cytoplasm and exported to the cell membrane where it becomes stuck. This protein is what then stimulates an immune response in the host.

We have shown that following a single dose of vaccine we can produce strong T cell responses and neutralising antibodies in most individuals. Following a second dose of the vaccine, the T cell response is not noticeably increased but neutralising antibodies were subsequently increased and now found in all volunteers. Viral vectored vaccines for previous diseases have shown well-maintained immune responses for at least a year after vaccination and in many cases much longer.

How has the genetic sequence of the chimpanzee Adenovirus been modified such that it is unable to replicate in human cells naturally to cause disease?

To render Adenoviral vectored vaccines unable to replicate in human cells, we remove the E1 region from the virus genome, which is essential for viral replication. It encodes for the first essential proteins expressed by the virus upon cell infection.

We still need to grow the virus in the lab as part of the manufacturing process. To do this we grow the virus in a special cell line called HEK-293 cells which express the E1 proteins to allow viral replication.

Why does this technology enable the vaccine to be stored at higher temperatures (compared to RNA vaccines)?

DNA is more stable than RNA. On top of this, the viral structure inherently helps to protect the integrity of the genetic information inside. This allows the vaccine to be stable at fridge temperature for long periods of time rather than requiring -20°C or -80°C.  Our vaccine is also stable for longer at room temperature once thawed compared to RNA vaccines.

Adenoviruses are also stabilised by the simple addition of sugar solutions and researchers are looking into improving processes by which Adenovirus vaccines can be freeze-dried onto sugar matrices. In the future, we hope to be able to routinely store such vaccines at room temperature.

How do viral mutations come about and what are their potential effects on vaccine immunity?

Mutations arise by chance during the replication of a virus’s genetic information. RNA viruses tend to have slightly higher mutation rates than DNA viruses, in part due to the lack of proofreading activity in the RNA-dependent RNA polymerases (RdRp) that are used to replicate their genomes. Coronaviruses are RNA viruses, but they actually have RdRp-independent proofreading activity and thus lower mutation rates compared to other RNA viruses. With the current viral population size so large, however, we fully expect to see many new variants.

Many mutations to viral gene sequences are silent mutations, where a change to the viral DNA or RNA sequence does not subsequently result in changes to the amino acid sequence of the viral proteins post translation. Other mutations will result in substitutions in the amino acid sequence and potential changes in the tertiary structure of viral proteins. Such changes can confer advantages or disadvantages to the virus which will then be selected for by evolutionary pressures.

T cells recognise viruses from many different short sequences of amino acids (peptides) and antibodies bind to viral proteins on many different parts of their tertiary structure. Whilst a single mutation may result in a single T cell clone or antibody losing the ability to recognise the virus, the redundancy in the system means it is unlikely that single mutations will have a significant impact on immunity overall. In addition to this, our immune system can adjust itself to combat changes in the virus. For example, our body over time optimises the antibodies it makes. A single antibody type may become more effective at binding a single variant or change so that it can recognise multiple variants (cross-reactive antibodies).

Mutations are being monitored closely by scientists, and it’s important we continue to remain vigilant for changes in the future. The University of Oxford is carefully assessing the impact of new variants on vaccine immunity and evaluating the processes needed for rapid development of adjusted COVID-19 vaccines if these should be necessary.

What would you say to reassure anyone who is worried about receiving the vaccine and has concerns over how the relevant safety trials have taken place when the vaccine has been delivered in a relatively short space of time? There are particular concerns about side effects on the long-term, which might not be detected during the fast-paced trials conducted.

Though our clinical trials have been performed in record time, we have undergone the same rigorous steps for assessing safety as we would in other clinical trials. There are a number of simple reasons for the increased speed: the removal of certain barriers such as the constant need to find funding, an expedited process for reviewing clinical trial data due to the pandemic setting and the fact that researchers and facilities have dropped work on other projects to focus on this one. In regards to long term side-effects of the vaccine, it is important to note that Adenovirus vaccines, including ChAdOx1 have been used in a number of other clinical vaccine trials in the past and volunteers in these studies have been followed up over long periods of time.

Do you think it possible that a vaccine will need to be given regularly e.g. annually, following other vaccination programmes?

Our ChAdOx1 SARS-CoV-2 vaccine is new and while we have shown it to be safe and effective we do not yet know how long immunity will last. Based on data from other vaccines using the same platform we fully expect the immune responses to last a year or more, hopefully long enough for us to help end the current pandemic. We also have data from other vaccine studies with Adenoviral vectors to show that vaccine-induced immune responses can be very effectively restored to initial levels, following booster vaccinations several years down the line.

Would an aerosol Covid-19 vaccine be feasible?

Aerosol vaccines are a new technology with great potential. They work by delivering the vaccine directly to the lungs to stimulate a localised mucosal immune response that in theory is more tailored to fighting respiratory diseases.

Aerosol vaccines have been successfully developed for influenza and are being developed for other respiratory diseases such as tuberculosis. It is popular because of its non-invasive, needle-free delivery method, but it has its challenges. This is an approach that is likely to be looked into in the future by vaccine developers for SARS-CoV-2 but is not a current priority.

As the vaccine is being rolled out at such a rapid pace across the UK, it can be easy to give more weight to sources which discredit and sow doubt. While the current vaccines may not give 100% immunity, their use will undoubtedly be essential for generating herd immunity to safeguard the population and weaken the hold of the virus. The Oxford vaccine has been distributed since the start of 2021 and as Dr Sean Elias highlights, it is the result of careful research and rigorous clinical trials. In the meantime, we should all keep in mind that remaining vigilant to continue fighting this pandemic is of importance to not just the scientific community, but to all of us too.

Is green social prescribing the future of health?

Can we control the power of the human genome?

The Oxford Scientist is a student run science magazine for Oxford University. Browse news, articles and more on our website.

Journalism up and down the country is facing a tsunami of hurdles: from evermore repressive regimes shutting down free speech to the income sources being cut off as a result of the pandemic.

For the Oxford Scientist, maintaining editorial independence is vital. There is no shady corporation funding us and demanding we paint company X, Y or Z in a positive light; we are completely student run, and thus rely on your generosity.

So, if you can, please consider donating. We know that the pandemic has hit many of us hard - including financially - so even if you can't support us monetarily, please consider sharing articles with friends, families, colleagues - it all helps!